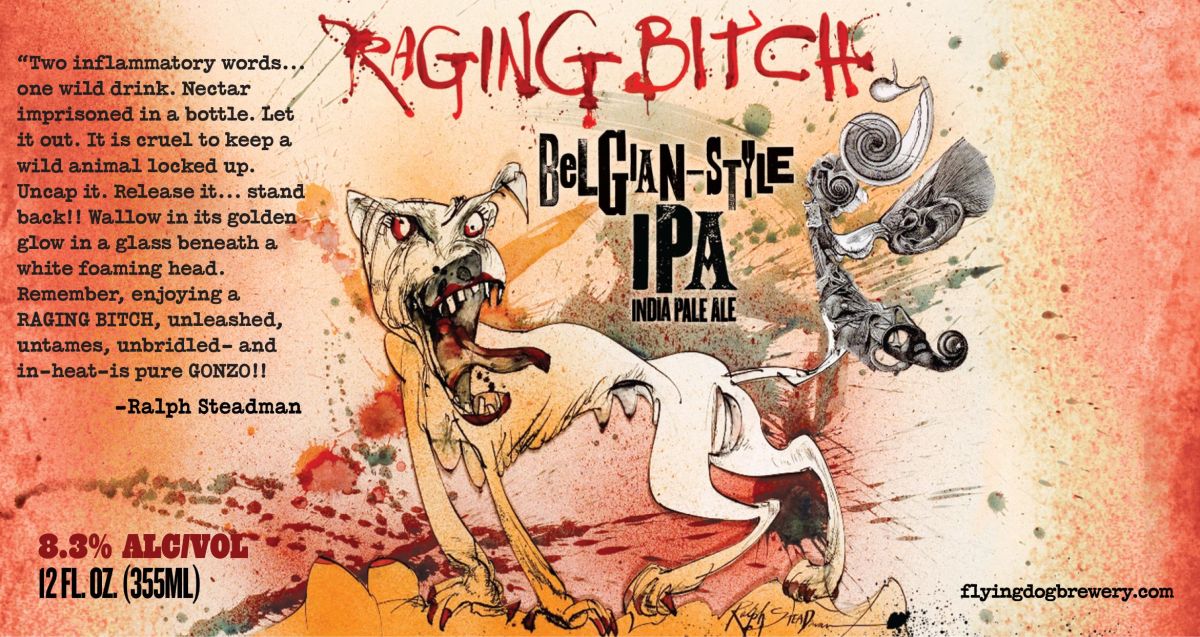 Flying Dog recently made public their decision to no longer retain membership in the Brewer’s Association of America as of June 1, 2017. What was behind this decision? The 1st Amendment of the Constitution of the United States of America states,

“Congress shall make no law… abridging the freedom of speech…”

Terrific! I love America and the right to free speech, even when I don’t particularly care for the words that are sometimes spoken! That is how the 1st Amendment works. As citizens, we are all entitled to freedom of speech, agree or disagree. What does that have to do with craft beer? In a nutshell-marketing and labels. The Brewer’s Association of America in April, 2017 informed craft brewery members they were instituting a new Marketing and Advertising Code. On the surface, the code appears merely as a reminder that breweries need to advertise responsibly and follow the traditional path of making sure they DO NOT PROMOTE in their advertising:

• excess drinking
• underage drinking
• drinking and driving
• illegal activity and drinking
• bad or irresponsible behavior and drinking
• claims that beer can solve all of your problems (social, mental, professional, or otherwise)

If we stopped here, this code seems innocuous enough mostly backing up federal law, and something all craft breweries would like to get on board with- acting responsibly towards the consumers that support them. The code does not stop there however and goes on to prevent breweries from advertising which:

This is where it starts to get a little murky when taking the 1st Amendment into consideration. There is an assumption here regarding reasonable adult individuals finding advertising appropriate or not. Don’t get me wrong- I understand that there is a section of every magazine rack that is required to shield young eyes from the cover and contents because they are not legally old enough to view those rags; much like the rating system for movies- like NC 17. This is fine as the law has been established to guide us (where children are concerned) as to what is appropriate. This doesn’t hold water when it comes to craft beer, an adult product.

It is easy to gather a group of ‘reasonable’ adult consumers together to determine what they find appropriate (or not) with regard to beer advertising/labels. Statistically they would probably be divided on many of the labels level of ‘appropriate’. That is because ‘reasonable’ and ‘appropriate’ can be extremely subjective in advertising. We have all heard the marketing mantra sex sells. Well according to the BA, sex, among other things would not be allowed as a sales tool any longer, if reasonable adults found it inappropriate.

This is where Caruso doesn’t budge, and views the new code as a form of as censorship, and critically a Constitutional violation. It has the potential to limit speech, freedom of expression, and advertising based on ideas and requirements that are entirely subjective. The supposed creation of objectivity in this code appears in the Advertising Complaint Review Panel. This three member panel would interject themselves if the brewery did not respond in a ‘satisfactory’ way to an advertising complaint. I am not completely clear on this eradicating subjectivity. How are they defining satisfactory?

A free market economy allows consumers to decide what they will and will not purchase/consume. The quality of the beer should be the determining factor. To get consumers in the door to sample quality beer, breweries advertise. In a crowded craft beer market, a unique or even controversial marketing campaign may set a brewery apart, luring or deterring potential customers. If a consumer doesn’t care for a marketing campaign, like the Swedish Bikini Team for example, they can choose to go elsewhere to spend hard earned dollars. Shouldn’t that be the determining factor? Caruso thinks so, and the 1st Amendment backs him up.

The counterpoint to this is that the Brewer’s Association is trying to hold their members to a higher standard than the ‘Swedish Bikini Team’, or mudslinging among competing breweries (another part of the ‘code’ prohibits defamation toward competing breweries). For that they should be lauded. These standards however (some of them) might be better off self-imposed as opposed to dictated when they violate the foundational documents of our nation. Why? Once you begin to make exceptions to the 1st Amendment, it will become easier to chip away at those core rights granted to us by our founding fathers; rights many died for, and continue to sacrifice for today.

In the end it may be much ado about nothing, and perhaps an overreaction. All breweries may in fact continue to operate as they have, with no actual infringement upon their rights to advertise as they see fit. Time will tell. Jim Caruso and Flying Dog won’t take that chance.
Cin Cin!

One thought on “Flying Dog and the 1st Amendment”