This week I was fortunate enough to get the opportunity to tour a working malt house in Cooksville, Maryland. Many of us enjoy fabulous local craft beer, and a fair contingent are quite discerning about the malts used. Few however really give much thought to the process of taking a seed, planting it into the ground, and what happens to that seed after the harvest and before it gets to the mash tun. It is a most fascinating process.
All of the malting grains that Dark Cloud uses are grown within fifteen miles of the malt house. Growing grains suitable for malting isn’t as easy as one might think. In fact, if you want excellent malt to make excellent beer there is a bit of crop management to attend to. Fortunately in Maryland we have an expert at the ready. Dr. Bob Kratochvil, an extension specialist in Agronomy with the University of Maryland not only has a blog about malt, he actively works with farmers on planting and managing these important and quite lucrative cover crops.

Not all malting grains make it to the malt house. Dr. Kratochvil shows farmers which varieties are best suited and how to maximize the quality, and minimize the fungus in our humid climate. Most malt grown in the United States is done in more arid climates like North Dakota, and is grown for macro-breweries like Miller Coors. With the moisture content of the East Coast to consider Dr. Kratochvil constantly searches for viable new varieties, always testing out new grains to find those best suited to our region. European varieties like some French malting grains, which are acclimated to wet climates, have proven quite suitable and possess a brilliant flavor profile for brewers.
Premium malting grains grown in Maryland fetch $6-10 per bushel, while grains not suitable for malting are used as feed or tilled back into the soil, garnering relatively no profit. Malting grains can double as feed grains as well- making it incredibly profitable for the farmers to plant. Since it is a winter crop, planting takes place after corn or soybean crops are harvested. The malting grains also draw harmful nutrients like nitrogen and phosphorus into their pulp, preventing them from leaching into the soil and the Chesapeake Bay. Dr. Kratochvil guides farmers through every step of the process to achieve the desired outcome. He also works with maltsters to ensure they work with the best grains, and are able to take the grain through the malting process and send it off to the brewers. In fact, it was Dr. Kratochvil that introduced the founding partners of Dark Cloud Malt House. 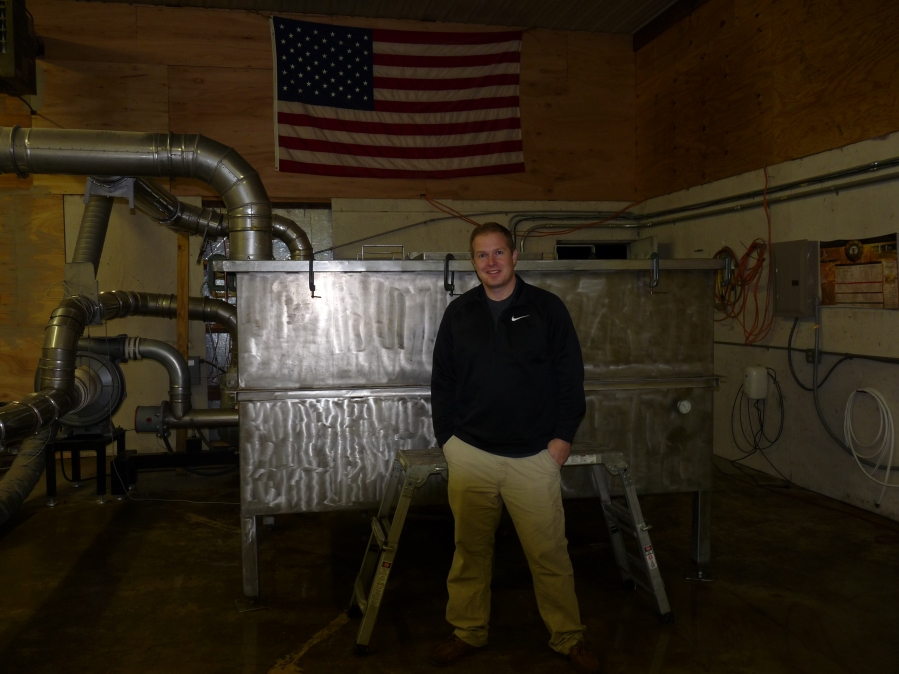 Danny Buswell, a chemical engineer and his partner Jesse Kais, an excellent brewer of malted beverages at both Flying Dog and Jailbreak are the men behind this incredible venture called Dark Cloud. Jesse became interested in the process as a brewer that desired local malting grains for his beers. Danny was infinitely intrigued with the malting process once Amber Fields started malting their own grains almost two decades ago. It was kismet really, as they each had reached out to Dr. Kratochvil and he in turn thought it wise to put them together. It was a natural fit. Getting started was problematic due to the lack of malting equipment on the market. Small scale malting equipment averages around $1 million, which is silly since one could not produce enough malt on such equipment to ever realize a profit. This mimics the early days of modern brewing in Maryland when homebrewers literally had to weld their own equipment together to brew. That is exactly what Danny and Jesse had to do, make their own equipment.
At a cost of $50, 000 it was no small feat, and no minor investment. It was also why they chose to malt grains within a tank as opposed to the legendary and common method of floor malting. For the small space they were using, which happened to be on the Kais family farm, it was the best way to control temperature and humidity- the cornerstones of successful malting. The self-made half-ton system operated perfectly, and was ideal for discovering if malting was a viable business model. 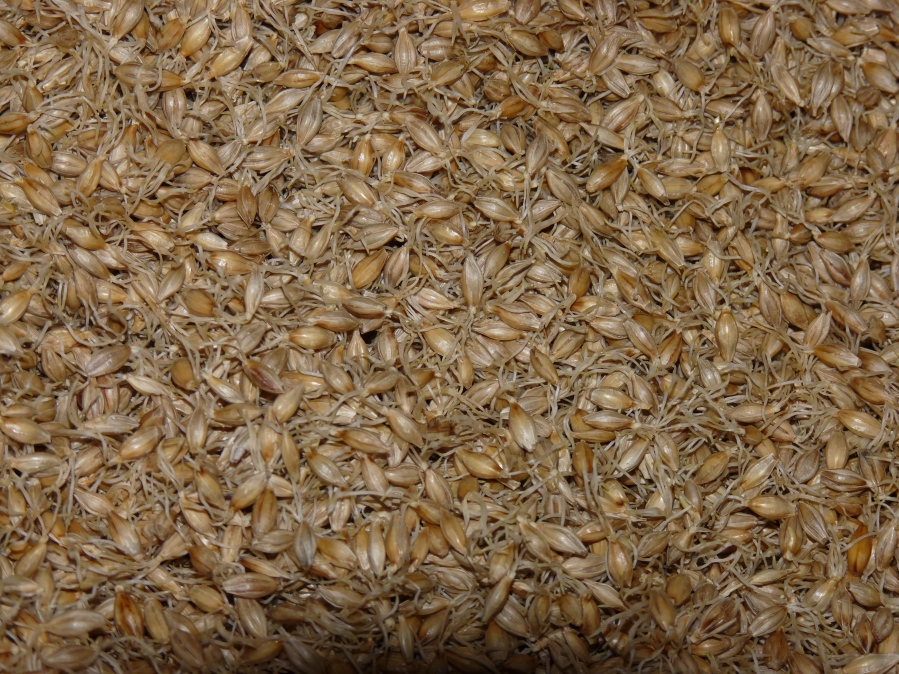 Malting grain is pretty straightforward but extremely labor intensive and heavily reliant upon a complete understanding of both chemical and agricultural processes taking place. It is also heavily dependent upon what kind of malt is being made- from pale to dark, barley to wheat. Before grains are put through the malting process, they must be tested to see if they are viable (chemically) and what type of malt they are most suited for. The raw grains are first steeped in water. Dark Cloud relies upon well water that is filtered and tested regularly. The steeping (and sparging) keeps oxygen in the process and allows the barley kernel to absorb water, triggering enzymes to break down seed to make starch available to the brewers. Germination will begin during the steeping process and is visible in the acrospires (the sprout) that emerges from the kernel.

Germination is the next step in the process. This is a critical component that must be monitored. The length of time for germination depends on several factors, from the type of barley (2 row vs 6 row), to the type of malt produced. It is stirred by hand through the process while humidity and temperature are tightly regulated. During germination the protein and carbohydrates are broken down, further opening the starch reserves. Finally the germination is halted when the barley is kiln dried.

If heat is not applied all of the starch reserves will be gone- leaving nothing for the brewers to work with. The kiln temperature and time varies greatly depending upon the desired malt -pale to dark, etc. For example the Pilsen malt would reach 180 degrees, while the Munich would be ideal at 220 degrees. Recirculated air is a key component to the kiln drying process. Once complete, every single batch is tested and the lab report is provided to the brewers to determine if it is suitable for their specified use. 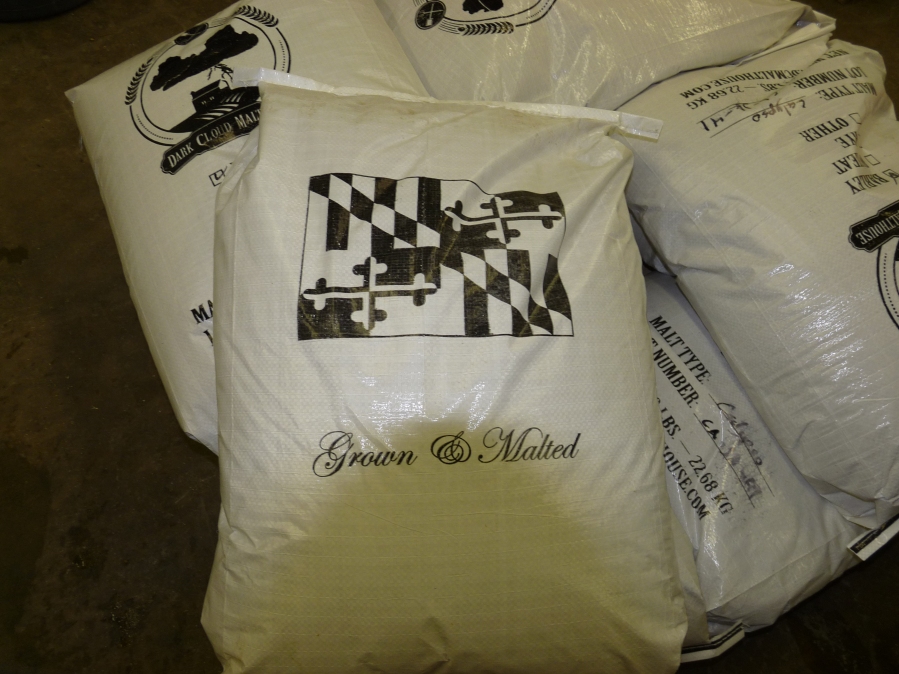 Dark Cloud produces around 2,000 bushels per year from the locally grown grains. Maryland small craft breweries are the target consumer. Dark Cloud is producing specialty malts only- filling a much needed gap in the market for our breweries to produce small batch beers. The average malt requirement for a small brew is anywhere from 500 to 1500 lbs. of malt. Each bushel contains 50 lbs. of malt, therefore the smallest batch needs 10 bushels of malt, and the largest 30 bushels. 2,000 bushels may not seem like much but it is certainly enough to accommodate a wide variety of brewers. Their very 1st customer was Eastern Shore Brewing, and although they operate on a small scale they have several customers already:
Checkerspot Brewing,
Milkhouse Brewery
Brookeville Beer Farm
Attaboy
Barley & Hops
House Cat
Rockwell

Dark Cloud serves breweries sprinkled across the entire state, but would like to expand. The initial creation of Dark Cloud and the past two years have provided what is known as “proof of concept”. In fact when Danny and Jesse decided to open operations the Maryland Department of Agriculture had just abandoned their malting grains program, deeming it a failure after 2 years. In reality that was not nearly enough time to make any accurate determination at all. Danny, Jesse, and Bob refused to give up however, and now it is a fruitful operation, inspiring other malt houses to pop up. The massive Proximity Malt in Laurel Delaware is working with Maryland and other regional farmers to supply enough malting grains to produce 1 million bushels per year- all to be sold to craft breweries on the East Coast. That provides even more encouragement to the fledgling maltsters.

In fact, things are going so well Danny and Jesse have applied for a loan to upgrade to a 3 ton system. This would allow them to build a new malt storage building, while malting 3.5 tons per week- equating to 14,000 bushels per year. That also allows them to accept quality malting grains from farmers across the state. This is a very good thing as grain loses between 15-30% of its weight during the malting process, therefore the more malting grains grown the better for Dark Cloud and all of the brewers they serve. That is also when Danny can finally quit his day job and stop driving from Easton to Howard County every night to malt, as malting would be his full time job!

Danny and Jesse embody the true spirit of entrepreneurs risking it all to make their dream a reality. It is humbling to bear witness to the men behind Dark Cloud with their eternally positive attitudes, and sheer motivation to make Maryland malt once again. Dark Cloud is a name that conjures vivid imagery, and one not soon to be forgotten unless the Maryland Legislature decides to pass regressive and harmful legislation against our state’s craft breweries. I believe that is the only thing that could hinder Dark Cloud’s incredibly bright future.